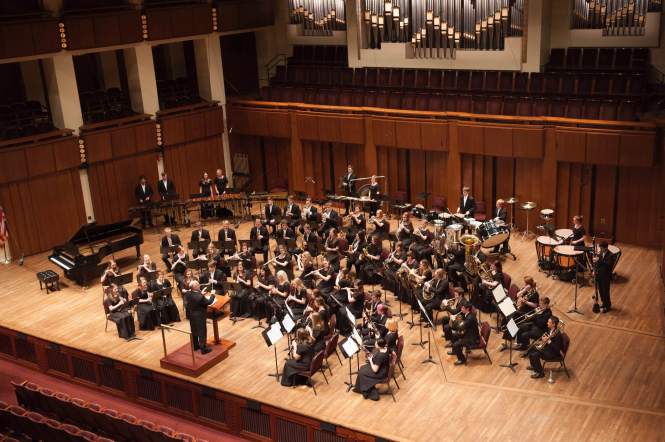 The Stillwater Wind Symphony performs throughout the year in the community and on its annual spring tours.  Highlights include a “Lullaby Concert” in the fall for young children in which the ensemble members plan, create and produce a concert with a local retirement village.  This concert begins a year that is heavily influenced by community outreach and public service.  The typical concert year includes the Stillwater Bands Kaleidoscope Concerts, three Winter Concerts with our top ensembles, a “Winter Concert” with a guest college ensemble and our Spring tour and concerts.  The year concludes with major concerts in the community around our Memorial Day services.

Members of the Wind Symphony also participate in Chamber Winds and Orchestral Winds.  In these areas, our members are able to experience both the joy of playing in small groups and a large orchestra.  The Orchestral Winds perform three major concerts with the Stillwater Orchestra and our Chamber Winds are active throughout the community at large. Our students chamber groups and soloists regularly take best of site awards at solo and ensemble festival.

In addition to our concerts, the Stillwater Wind Symphony participates in noncompetitive events such as our District Music Festival and MSHSL Band Contest.  We are proud to carry on a long tradition of Superior ratings at state large group contest in Minnesota, having received this top designation for 68 years consecutively, including straight superior ratings this spring.

The Stillwater Wind Symphony has performed throughout the upper Midwest, Canada, Iceland, Sweden and Norway.  Dennis R. Lindsay is the current conductor, having served as the lead conductor for this ensemble since 2008.